JamesBondNL: Dear Mr Kleinman. It is a pleasure meeting you for this interview. How is your schedule playing out so far this week? And are you looking forward to yet another Bond adventure?

Daniel Kleinman: “This week [early July] I am filming a commercial in Australia. Ironically it’s cold here in Sydney and very hot in the UK. If 007 was Australian, perhaps he would be called ‘James Bondi’ [laughs], that’s the area I’m staying in. I haven’t been asked to join in with the next Bond production. If I am it will probably be much closer to the actual start of filming. I love being part of the Bond ‘family’ and if I’m free I’m always pleased to work on the main titles.”

JamesBondNL: I understand. So let’s come back to Bond 25 in a bit. First, let us dive a bit into your past. I was surprised to see your name popping up as a founding member of British rock/punk band Bazooka Joe. To Dutch Bond fans perhaps the very name of the band does not immediately ring a bell. Yet it was your fellow band member Stuart Goddard, a.k.a. Adam from The Ants, who eventually helped you landing the gig of directing one of his music videos, titled “Antmusic”. Could you tell us how that happened?

Daniel Kleinman: “Yes indeed. I was in Bazooka Joe, a pre punk London rock band, in the early 1970’s. It was formed at school by my friends and I. Then I went to art school where I met Stuart. He became the band’s bass player. Eventually he decided to start his own band Adam and the Ants. When I started directing music videos Adam asked me to film several of his. However “Antmusic” wasn’t one of them, that was directed by Steven Barron, another friend. I helped with the art department on that video but later I did direct a few Ant videos myself.”

JamesBondNL: A-ha! [no pun intended]. But you mean Irish director Steven ‘Steve’ Barron, who also directed the videoclip The Living Daylights for A-ha! Actually, last year JBN did a special about The Living Daylights. So we interviewed German actor Andreas Wisniewski, who played Necros in The Living Daylights. Apparently, British director Ken Russell discovered Wisniewski in 1985. He let him feature in Elton John’s music video for “Nikita”. At the very same time you directed Madonna’s music video “Dress You Up”, featuring live footage from her Virgin Concert Tour. Is that not a more precarious, time-consuming project, as you need to actually tour with an entire crew?

Daniel Kleinman: “Well indeed. One of the things I did in the 1980’s along with music videos was film music concerts. Some were released as TV films, Madonna’s live tour was one of these. I filmed her over two nights with only a few cameras, but as it was shot on film it was quite complicated. I also filmed concerts for Sheila E. [she’s relatively often in The Netherlands, performing with The Ladies Of Soul], hard-rock band Van Halen and the live part of Prince’s movie Sign of the Times.”

“Well, when I was asked to create the main titles for GoldenEye, I was put under no pressure to create any specific thing at all as I recall. Michael Wilson asked me if I thought it a good idea to keep the ‘silhouetted ladies’ and guns etc.”

JamesBondNL: I didn’t know filming these live concerts is that complicated. How does that go with more non-live clips? “Like A Virgin” is mainly a live videoclip, but the video for Stevie Wonder’s hit “I Just Called To Say I Love You” features a lot of basic animated computer graphics. How difficult is it to create and design such abstract visual effects on a computer from…..1985?

Daniel Kleinman: “Actually, I only filmed the live concert part of Stevie Wonder’s video, I shot his whole concert. The graphics in the stand-alone video for “I Just Called” was done by someone else.”

JamesBondNL: While shooting with your team, did you also hire someone else to do the storyboarding of your first music videos?

Daniel Kleinman: “I always used to have the ideas for and storyboard my own videos. I don’t draw them so often now but still do them occasionally.”

JamesBondNL: A question about your time as a student. You have graduated from Hornsey College of Art (now part of Middlesex University). It was considered an iconic British art institution, renowned for its experimental and progressive approach to art and design education. What did Hornsey College of Art teach you with regard to managing your own design projects?

Daniel Kleinman: ”I spent 4 years at Hornsey experimenting with different media and areas in art and design. I ended up mostly concentrating on drawing under the tutelage of Roger Law, now most well-known for creating Spitting Image. He is also a potter.”

JamesBondNL: I think some of the readers know the “Spitting Image”-sketches with Roger Moore as Bond. Actually, Bond came along during your professional career. A breakthrough in 1989 shaped your later work for the James Bond franchise. In that year you directed the music video for the title song Licence To Kill, performed by Gladys Knight. At the time Maurice Binder was still main title designer. Were you actually in touch with Binder at the time? Did he advice you on certain visual elements that you used in your music video?

Daniel Kleinman: “Sadly I never met or ever spoke to Maurice Binder, but I greatly admired his work and radical approach to film graphics.”

JamesBondNL: Did you actually get some inspiration from Maurice Binder for your earlier work as a music video director?

Daniel Kleinman: “Licence to Kill was meant to be a kind of ‘homage’ to Maurice and his title sequences. But my other work was very much varied as I tried different things.”

JamesBondNL: Hence your work as a director of various commercials no? I come to that aspect in a bit. Although, back in 1994 when you took over as titles designer, it must have been a very ‘different thing’ as well. How were you approached by EON Productions and how much pressure did you feel to follow Binder’s footsteps?

Daniel Kleinman: “Well, when I was asked to create the main titles for GoldenEye, I was put under no pressure to create any specific thing at all as I recall. Michael Wilson asked me if I thought it a good idea to keep the ‘silhouetted ladies’ and guns etc. I said “Yes”. I suppose that was the right answer.”

JamesBondNL: The titles for GoldenEye were in many ways different from Maurice Binder’s approach to main title designs. For instance, with help of some CGI-effects it seems you injected the titles with more visual (3D) depth, as well as narrative depth. Does this not make the process of designing and directing the titles more time-consuming?

Daniel Kleinman: “Actually, there is very little CGI in the GoldenEye titles. CGI was still very much in its infancy and could only deal with things like the gun barrel. Most of the effects and objects in the sequence are models and set pieces. I shot on film and edited in an ‘analogue suite’. This made the process for me reasonably flexible and easy, although it made it very hard for the technicians who then had to translate the analogue version of the sequence into digital pictures with a high enough resolution to be rescanned back onto film negative.

So that was the only time I used that process. In following title sequences I worked directly with digital files and that was a very difficult and time-consuming process. I could not watch the sequence in real time, in-sync with the music for instance. I found that process very frustrating. But these days the power of the computers and processors has increased so much that it is no longer an issue.”

JamesBondNL: And even more so, doesn’t it make your work more dependent on the work of scriptwriters from the film?

Daniel Kleinman: “I always read the script before I come up with the ideas for the title sequences. I try to make the images and suggested narrative fit with the story of the film.”

JamesBondNL: Regarding that narrative, GoldenEye features many elements representing the fall of the Soviet Union, and with it the Iron Curtain. So at the time you were daring enough to inject a bit of……geopolitics in the film. We now live in 2018, it seems Russia has actually risen again from those Soviet ashes and is now considered a smarter and stronger power on the world stage. Would you mind to feature such a politically sensitive narrative again in a main titles design if EON Productions would ask you to do that?

Daniel Kleinman: “In GoldenEye I wanted the sequence to illustrate the idea of time passing, and inform the viewer that since the story in the opening reels, time had passed and that the biggest relevant thing that had happened was the fall of the Soviet Union. So this was an event that had already happened.

Although I believe the title sequence caused some problems with the film being distributed in certain communist countries. So I am not sure the producers would want anything too controversial in the titles in the future. But with the main titles I do always try to have elements of the crucial themes from the main movie. So it’s really down to the script.”

“[For GoldenEye] I shot on film and edited in an ‘analogue suite’. This made the process for me reasonably flexible and easy, although it made it very hard for the technicians who then had to translate the analogue version of the sequence into digital pictures with a high enough resolution to be rescanned back onto film negative.”

JamesBondNL: When you create the main titles, two companies play a pivotal role during the pre-production, production and post-production of these title designs. They are Rattling Stick, which you actually co-founded, and Framestore. What are their roles in the complete production cycle of the Bond titles?

Daniel Kleinman: “Well, Rattling Stick is my production company. It organizes the shoot and facilitates the making of commercials, music videos, movies, titles, TV and more. Framestore is the special effects company that has the talent and machines to process and bring to life the special effects that I use in the titles. It creates the CGI for instance.” 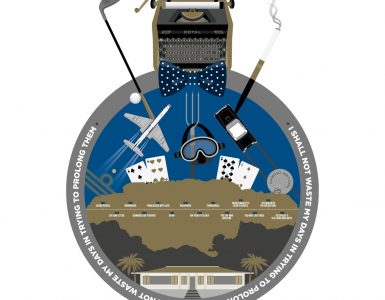 Treasures From Film and Television veiling