JamesBondNL: No main titles are alike Daniel. So if we fastforward to Casino Royale [2006], we see a radical different approach. You basically revolutionized, if I may say so, the visual appearance of the main titles. It shifted with Die Another Day from a more CGI-conscious torture sequence with real-life imagery from actors into a more graphic-driven title design, hinting to 1950’s graphical designs, like poker cards and book covers, for Casino Royale. Actually, there seems to be an absence of realistic silhouettes from human beings…or women. To me it reminded me a bit of Maurice Binder’s very first title design for Doctor No. How did you arrive to this concept, and why did you return to a more ‘classical’ design for Skyfall?

Daniel Kleinman: ”Casino Royale was a ‘reboot’-style film. It was a story of James Bond before he becomes the character we know, cleverly coinciding with a new actor [Daniel Craig] taking over the role. So I didn’t want to include images that suggested his character was the fully formed person he would become. So no ladies in it for instance. It was also the first novel that Ian Fleming wrote and he designed the cover for that book. It was that that gave me inspiration for the style. Once Bond had become a 007-agent and had his heart broken and betrayed, he becomes the Bond we are familiar with and so the classic imagery was again appropriate in later movies.”

JamesBondNL: The two main title designs that followed Doctor No, the main titles for From Russia With Love and Goldfinger, were designed by Robert Brownjohn. His titles basically only featured projections on women. A very simple, yet effective concept for today’s standards. Would you be able to simplify your title designs in such a way? From either a creative point of view, or to apply some cost- and time reduction (not to say that I prefer that, since I adore your current main title designs!)?

Daniel Kleinman: “Like the films themselves, the titles reflect the era in which they are made. I try to keep the imagery fresh whilst keeping true to the visual language historically associated with James Bond. I’m certainly not averse to simplifying and in fact I strive to keep things simple but it does not always work out like that.”

JamesBondNL: That’s why you do need a big team supporting you no? How big is the entire team you usually work with, Rattling Stick and Framestore included?

Daniel Kleinman: “The actual filming of elements for the main titles is like any film production. There is a camera-man and film crew, art department etc. Rattling Stick has a production team of several people. Then there are editors, actors, agents etc. involved. The post-production facilitated by Framestore requires a big team and lots of people. GoldenEye was a fairly small group, but now I don’t even know how many people are working on all the various elements.”

“The actual filming of elements for the main titles is like any film production. There is a camera-man and film crew, art department etc.”

JamesBondNL: Your main title designs feature lots of CGI-driven effects, in which mainly Framestore is involved. Yet some very distinct aspects of the Maurice Binder designs remain. For instance the women, both naked or with clothes, and objects like guns. How do you cast the women for your main titles? Do you have the final say in that casting process?

Daniel Kleinman: “Yes, I have the final say. I usually use a casting director and do a first casting of digital filming. Then I do what is called ‘call backs’ when the best dancers or actresses are asked back and I and my team attend that. I try to include the women in the sequences in a tasteful way. It is difficult as taste and sensibilities these days are very different from the 1960’s when the elements and visual language of the titles and films in general were founded. I continually refer back to those founding visual tropes as they are what make the sequence a ‘Bond’-sequence rather than just another action film.”

JamesBondNL: [laughs] Have you……..ever had contact with some of the former ‘main title ladies’? After the premiere of a Bond film for instance? Would it not be a great idea if you can bring some of those women to the premiere of Bond 25?

Daniel Kleinman: “No. The relationship is always purely professional [smiles].”

JamesBondNL: Regarding filming the entire main title sequence, what kind of camera equipment do you mainly use? In the case of digital camera equipment, have you ever considered to try filming with ‘analogue’, traditional equipment?

Daniel Kleinman: “The first few sequences I created, were actually filmed on traditional film negative. And although I spent many, many years filming on traditional film and editing on film, these days it really isn’t practical for many reasons, time and money basically.”

JamesBondNL: Once you are in the editing room, you obviously use loads of software programs and hardware with massive capacities. Could you elaborate on what programs you are using and for what aspect of the titles production they are used?

Daniel Kleinman: “Sometimes I edit the basic ‘cut’ myself on “Final Cut Pro”. But sometimes I work with another editor to choose the takes and get the basic structure how I want it to be. Then I start working with Framestore. I used to know how to work the post effects machines but now they are far to specialized. Framestore uses many different types of software and hardware to create the special effects for me. In fact, I don’t even know anymore what most of them are! “Inferno” is probably the main editing tool but there are many others.”

JamesBondNL: Back to the present. Bond 25 is nearing very fast. It will be Daniel Craig’s final time as Her Majesty’s Secret Agent. Back in the early 1980’s, when you actually started your music video career, there was another (unofficial) send-off for Sean Connery’s Bond in Never Say Never Again. Do you already have some visual ideas for the main title design for Craig’s last outing?

Daniel Kleinman: “I’m afraid I have not yet been asked to collaborate on the next film. I may be…..or I may not. I certainly haven’t started thinking about it at all.”

JamesBondNL: Perhaps because the process of designing main titles starts when principal photography of Bond 25 starts [December/January]. Just an in-between question. Some of the older Bond films also feature an end titles-design with more visual elements than just typography, like with You Only Live Twice. Would you be interested in designing that as well? Or do you usually prefer to outsource that part?

Daniel Kleinman: “Well, the end titles these days are now usually only typography, and I am not really interested in that area.”

Daniel Kleinman: “There are various reasons why the gun barrel sequence gets reinvented. It’s usually down to the director of the main film. I enjoy tweaking and reworking that iconic bit of film graphic. I think I have used the same one since SPECTRE [compared to all pre-Craig gun barrel sequences] or did not change it much. But Sam Mendes filmed the last one himself.”

JamesBondNL: I work and live in Barcelona myself, and I actually saw you there once. As a matter of fact, I recall that three years ago you were working in the ‘W Hotel’ with this magnificent view over the Mediterranean. Do locations as such give you fresh inspiration for your work as a director for main titles, music videos and commercials?

Daniel Kleinman: “I like Barcelona very much and it was there that I was having the main ideas for SPECTRE. This photo is of my computer with a SPECTRE-storyboard in progress on my laptop with the view of Barcelona beach in the background.”

JamesBondNL: In Barcelona I frequently see companies filming a commercial. Actually, that is a big chunk of your work. In one of your more recent commercials, you added a fair amount of Bond-inspired action to the final product. It concerns the Vodafone commercial featuring British actor Martin Freeman. How long does it usually take to finalize a complete commercial in comparison with the main titles for Bond?

Daniel Kleinman: ”Commercials take far less time in general than the James Bond title sequences, as they are shorter and they usually do not require to be finished in such high resolution. Also, they are quite often live action. It’s the animated special effects that are very time consuming.”

JamesBondNL: Lastly, one of your colleagues in the industry, Henry Hobson, designs the main titles and all other visual content for the Academy Awards. However, there is no category yet for “Best Main Title Design”, and yet the work involved in creating such pivotal parts of moviemaking can be both time-consuming and creatively exhausting. What would your ‘promotional message’ be for the Academy if they are contemplating a new category to the Oscars?

JamesBondNL: Dear Mr Kleinman. On behalf of JamesBondNL, thank you so much for this extensive, in-depth interview. Can we organize another meet-up for the 2019 royal premiere of Bond 25?

Daniel Kleinman: “Sure! if I am involved with that film. And thank you Gert.” 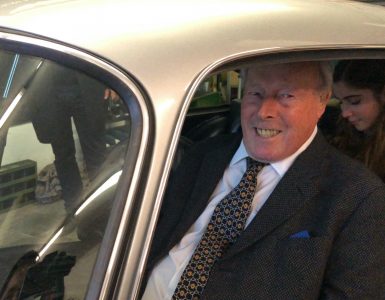